For as many people who have said ‘any publicity is good publicity’ there are probably an equal number who have said ‘no news is good news’, so whether you want publicity or want to avoid publicity, brand reputation management should matter to you.

Some people have taken the thirst for exposure to extremes over the years by trying to get as much publicity as possible; to get their 15 minutes of fame, for whatever reason, however negative or ill-conceived. From this Warhol-esque desire has emerged both individual and entrepreneur ‘celebrities’ who perform their best (or their worst) for public consumption. Against the backdrop of careers being both made and broken (only to be made again!) businesses and entrepreneurs have been looking at how the media rewards and punishes brands for their profiles or activities. But now with the advance of social media, ‘everyone’s a publisher’, so it is not just the traditional media that brands need to keep an eye on.

Some brands believe they have to protect their reputations and invest in hiring an army of crisis management consultants to put the company through drills and scenarios to test the resolve of their customer service teams ability to deal with escalating situations; their PR team’s ability to calm the situation down by communicating effectively; or the product team’s ability to put out product warnings or worse still, if the situation becomes irretrievable, to pull products. I don’t think anyone was immune to the absolute trauma which befell Samsung after the fiasco they had with the Note 7!

On the flip-side, other companies or individuals meander through life without a care or thought to their brand reputation, frankly they wouldn’t know anyone was talking about them even if their premature death was announced on social media! No drills or scenarios for this group, in fact how could they respond to a crisis that they were not even aware of?

It is not a coincidence that people have said for a long time ‘good news travels, but bad news travels faster’, human nature is to highlight the bad, the disaster, or the unfortunate. It is not nice, it is not pretty, but it is life. To assume that humans will not pick over the carcass of a company which has fallen on hard times with eager anticipation of the next bite, is to misunderstand human psychology.

In an age where TV, radio, newspapers and social media is accessible to all, bad news moves even faster nowadays, so knowing what your risks are BEFORE anything happens helps you to put an action plan in place so you know what to do in a crisis. Brand reputation management issues can be extreme – a death on a construction site; a devastating plane crash involving your product or personnel; a customer is injured by one of your products, it catches fire, or the one which breaks everyone’s hearts – a child is injured or killed; or even a mass disaster such as an oil spill which endangers both human life and nature.

But it can equally be the more usual customer service disaster, such as customer complaints, or investor or ex-employee disgruntlement, which whilst not a human tragedy can have a devastating impact of a company’s value. CEOs and entrepreneurs have found themselves at the fore front of personal or professional storms which descend upon them like a tornado crushing everything that they have built in its path. Being able to be alerted, having a plan and dealing with the situation can help prevent most situations from escalating and taking on a viral capacity.

So whether you are an individual or a business it is worthwhile taking time to consider - should the worst thing happen, how would you know about it? And how would you deal with it? Whose responsibility would it be? And what steps would you take to rectify the situation?

But maybe this is being over dramatic?

Most businesses and people continue without any calamities happening which affect their sales. Maybe a contract was lost due to competitor undercutting on price, maybe people have stopped using your services as much as they used to for their own personal reasons. Maybe your business partners are not taking your calls and the board is being dismissive for personality driven reasons, but maybe there is another reason that because you don’t monitor your reputation you are not aware of?

Not checking your brands reputation if you are a business or individual with a public profile is akin to sleeping around and not having STD checks. You wouldn’t do one, so why do the other?

Businesses have long been advised to have a business continuity plan which they can put into action should an unlikely event which causes mass business disruption happen, but how many businesses have a crisis management or a brand reputation management plan? It only takes one situation which gets out of control to make people realise the opportunity missed from what is a small investment in protecting your brand.

What about the people who don’t want publicity?

Even those people need to have a system in place of monitoring their brand reputation with an action plan for intervention and removal. If your privacy is important to you, then making sure that it is respected is a small investment to make. If you don’t look to see if people are talking about you, or look to find out what they are saying, how do you know your privacy is being respected? So perhaps in this circumstance, no news would be good news after all…

Find out more about our Brand Reputation Management Service 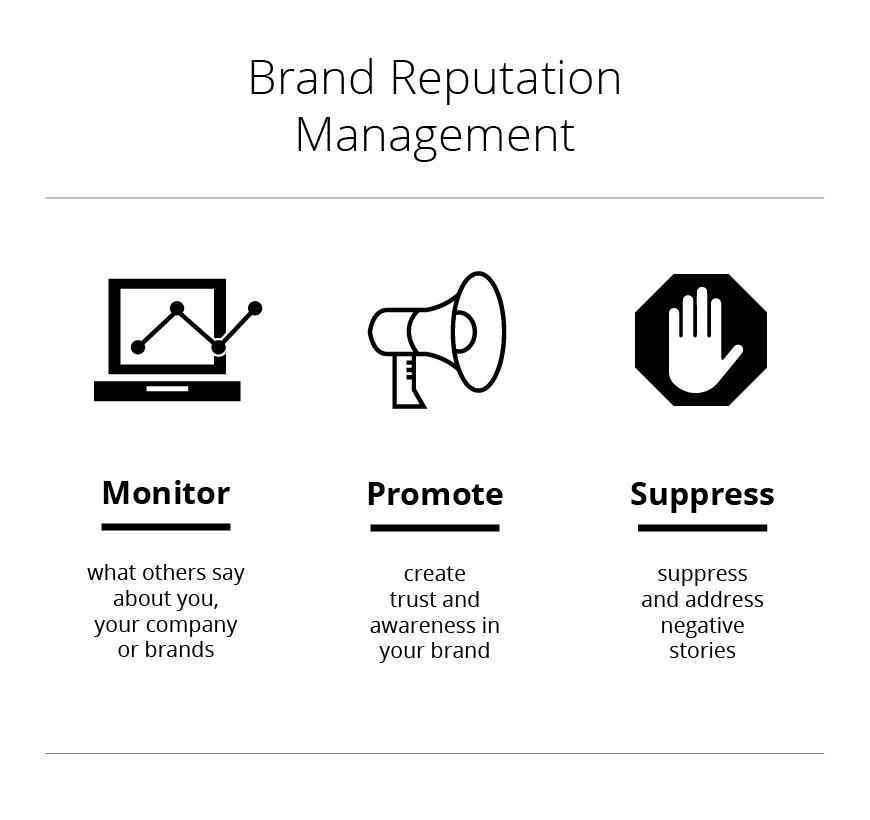 Back to News Zone